On 18th-19th May 2017 the first opsi4instituts conference took place at the Georg Eckard Institute. This conference had a focus on opsi packaging and was a great meet & greet with opsi users from institutes taking part in the German research network Deutsches Forschungsnetzwerk. The response to the first event was amazing. A few days after announcement all seats were already taken.

We want to give special thanks to Detlef Krummel from the project leading group of opsi4instituts and the Georg Eckard Institute. They organized and financed this conference. The range of participants was wide. It varied from people interested in opsi up to long time opsi users.

The program was great and had bits for everyone. At first Detlef talked about security in client infrastructures and how opsi can help with it. Thomas Besser held a talk about the experiences and requirements in the packaging work from opsi4instituts. I myself presented the releasemanagement of opsi, quality assurance, the new opsi 4.x test environment, what is new in opsi 4.0 and what will come with opsi 4.1. In addition I also had a small track on the second conference day. This track focused on packaging best practices and made a live coding session with the webservice and methods of opsi. uib's technical partners c.a.p.e. IT GmbH and Univention GmbH also participated in the conference. Rico Barth (c.a.p.e. IT GmbH) presented the opsi-inventory integration in kixdesk. Ben Haberhauer (Univention GmbH) talked about opsi integration on Univention Corporate Server (UCS).

We have had two large open discusions. In both all of the participants had the chance to discuss most of the questions directly with the project leaders of opsi4instituts and the vendor of opsi. Many experiences were shared at this conference. After the first day a social event was held in the old town of Braunschweig. The city is great and I can recommend everyone to plan a visit there. Also the "Source Hollandaise" was great ;)

It was also amazong to see what GEI has done. We had a tour through the library of GEI. There we learned what the GEI does in regard to worldwide schoolbook research. It was very interesting to see how different the world is regarding this topic. In my personal opinion this is a very important research. Thank you for this valuable insights.

Many ideas were born at this conference and we will try to meet again in 2018. We will announce more information ASAP. 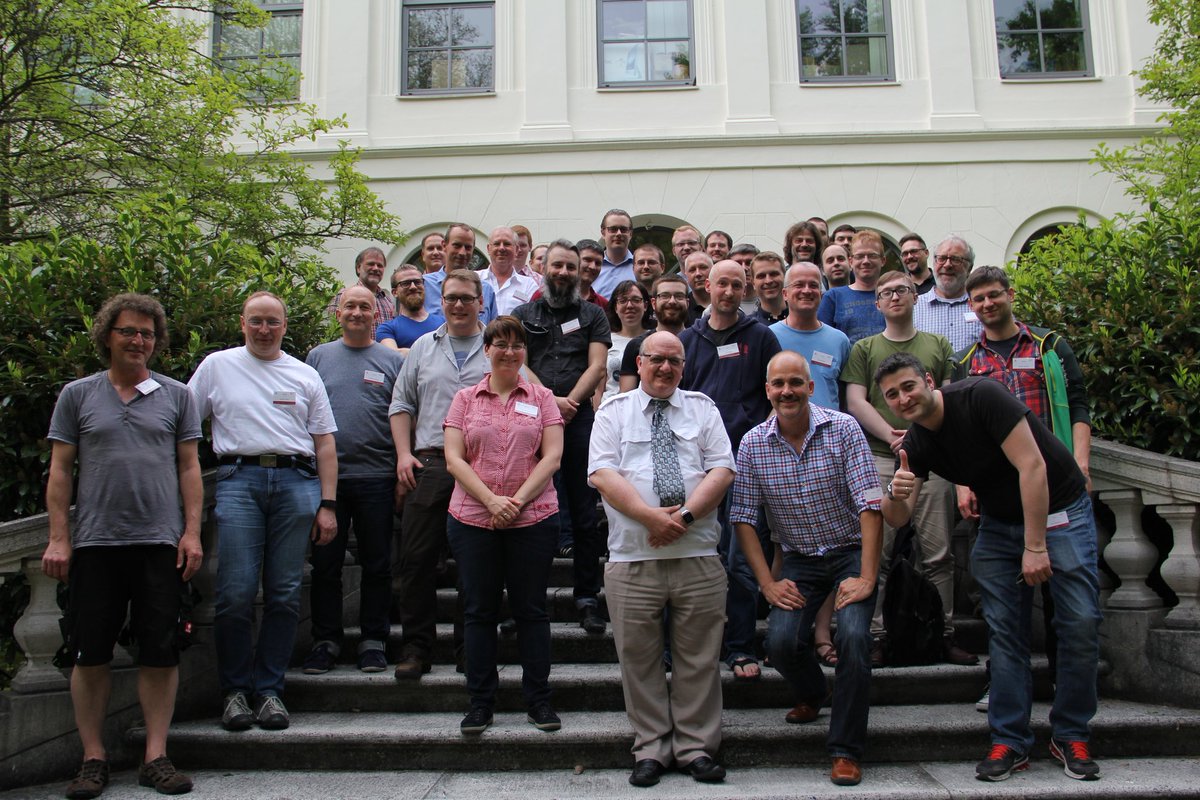 Last weekend the Python guys went on a trip to Munich to visit a conference around the Web with it's various forms and Python, PyConWeb. This is Nikos review of the event.

We use the upcoming opsi 4.1 to remove obsolete raiminigs that accumulated over time. This is also a good time to get the packaging up to date.

On systems running systemd we used some hacks with opsi 4.0 that allowed us to treat support for systemd as an optional feature. Now we want to make systemd first class, remove hacks and use the standards that the various distributions recommend.

I want to show how we end up packaging opsiconfd to work with systems using Debians .deb package format and those using .rpm. .deb files work the same across all major distributions and we serve Debian, Ubuntu and Univention Corporate Server (UCS) with the same setup. On the RPM-side we focus on the distributions provided by SUSE (SLES, openSUSE), Red Hat (RHEL) and the open source variant CentOS.

We have new stuff to play with! Since last week we have two ARM boards. The official openSuse Build Service can't make Debian and Ubuntu packages for the ARM architecture. The OBS lacks the ARM repositories within the Debian and Ubuntu projects from where the packages are downloaded. Luckily we have our own internal instance. Let's see where this will get our beloved opsi.

However opsi 4.1 will use another tftpd. With this new tftpd opsi is no longer restricted to the infamous 90MB file limit it was scratching all the time. Without this limitation the bootimage can feature more packages and features. One of those features is a basic splash screen.

Do you know that feeling when you are sure certain things exist but others don't? I had that exact feeling a short while ago during a discussing with one of our support staff. I thought it would be a good idea to show the documentation so I told him to just open the manpages.

After a short silence he said that there are no manpages and he'd be surprised if there would be. But I was certain, I did bring them into the build process and the files are there! We checked and he was right: no manpages existed. There weren't even appropriate files to be found on the server. That seemed impossible!

After I checked the script used for creating the packages everything seemed good. But it began to dawn on me why there were no manpages installed.

The old building process all took place on one machine where we would manually update the working copy of the repository and then run a script that gave us three files we would then load into OBS. That script did also include the manpages.

Because there are usually only few changes on the options of the utility script the creation of the manpages was a separate script. Our manpages are written in asciidoc and then converted into the required format. This makes writing them very easy. After they are converted to the manpage format we use them for all the different distributions we support.

This was not a problem as long as we kept building on that machine and only updated the files in our working copy. But a while ago we switched to Jenkins to fulfill this task whenever we push something new onto the repository. The switch was successful but one thing was forgotten: running the script that creates the manpages!

The fix was a small one and since opsi-utils 4.0.7.14-2 the manpages are installed alongside the programs. Again.

Aspect-oriented programming (AOP) is a program paradigm taking modularity to the next level. I want to give an insight into this with my own example to show how it can be used beneficially.

Did you know that you can follow us on Twitter? Get your dose of opsi development at @opsi_org!

The current week was for nearly all of us under the sign of CeBIT which will take place at Hannover, Germany the next week. The technology fair is an important date for the company and we use it not only to talk to users old and new but also to show new features.

We will be in the Open Source Park in hall 3 at D35 and we'd love to talk to you!

For presentations we bring some machines with us that hold complete demo environments. The demo environments feature various virtual clients all equipped with different operating systems and a complete Samba 4 AD DC. Of course all these were set up using opsi! Admittedly it took us some time to be able to set up the machines through opsi like this but we end up with multiple machines set up to feature the exact same installations and data. And now all it takes to set up a machine like this just requires a few clicks.

People from the dev team will be present the whole week and there will be a talk about our testing environment on friday. I've even heard some rumors about opsi swag... ;)

So if you are at CeBIT come and visit us!

I needed to package an application consisting of a Python package and a corresponding commandline script. Starting from scratch I was able to use some modern techniques for this: Entry Points and pybuild.